Manchester City Council approved last month a masterplan and strategic regeneration framework to redevelop Manchester Metropolitan University’s Aytoun Street Campus in the heart of the city. There can be few locations quite as well positioned with its proximity to Piccadilly Station, an increasingly significant regional rail hub, as well as part of the characterful and vibrant Canal Street neighbourhood, one of Europe's liveliest gay areas.

The challenge of course is to make the most of that fantastic potential, which the university failed to achieve.

The masterplan proposals put forward by joint venture partners Capital & Centric and Henry Boot Developments, although still retaining some flexibility of final form, do suggest a positive approach. The introduction of a mix of uses including hotels and leisure space, and bars and independent restaurants will help to enliven streets throughout the day. Around 500 homes of a range of types will also continue the trend of populating and humanising the city centre. Sensitivities around student residential and its appropriate location continue in the city but this can no doubt be carefully handled as part of a mixed community.

The opening up of public routes and spaces, including the rediscovered Little David Street, offers convenient and meaningful new connections. The proposed new square facing on to the canal, for example, offers a genuine focus for the new district. If detailed correctly, this can draw upon the vibrancy of Canal Street, open up views of the canal itself, whilst also providing the space for a new, complementary character to emerge. 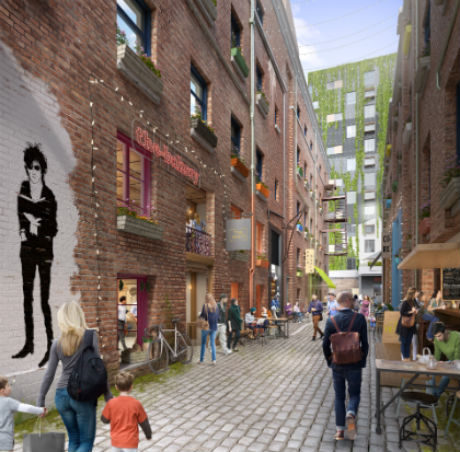 In general, the approach to building height and massing seems sound with two development options which both reflect the scale of nearby recent development and also respect the Grade II Listed Buildings on the site and close to it, such as the Crown Court and fire station. Picking up on the metropolitan scale and ambition shown in these impressive buildings feels entirely appropriate in a city on the rise. One option proposes a building up to around 30 storeys, reflecting the central location and high degree of public transport accessibility. Design standards need to be high in such a prominent location to ensure that this development continues the gradual process of enhancing the sense of arrival in the city.

With the increasing recognition and interest in creating a Northern Powerhouse these proposals are timely. They enable the city to capture fully the impact of transport investment and can be seen as part of an overall process of change around Piccadilly, similar to that taking place at London rail hubs, such as the once down-at-heel but now hugely impressive Kings Cross.

Jaimie Ferguson is a director and head of design at architects and urban designers Turley. He can be reached by email: Jaimie.ferguson@turley.co.uk