The challenge:
After severe flooding in Witton, Birmingham, in 2007, work began to design flood defences along that section of the River Tame. "The challenge [the Environment Agency] faced was that modelling showed the only way they could alleviate [the flood risk] was to build a huge wall right through the middle of Witton… [which meant] people wouldn’t be able to connect with the river anymore," says Sally Robertshaw, community programmes manager at design agency MADE.

The solution:
MADE linked the Environment Agency with artists who were tasked with coming up with design-led improvements to the flood defences that would celebrate the local area, and help residents to connect with the river.

Local artist and historian Jenni Dixon was commissioned to carry out preliminary research to understand the local area and its history. She also ran a series of events, such as trail walks, intended to help ascertain what the local community thought about the river, says Robertshaw.

This initial research fed into the work of two local artists who worked with the Environment Agency’s in-house design team. "The brief was to… try and inform the design [of the flood defences] in some way," Robertshaw says. "There were some things they could challenge within the wall design, and there were some things that were clearly fixed and had to be a certain way for engineering purposes."

Following the artists’ involvement, it is planned that words associated with the river will be written on the defence wall, including its name, the direction it flows in, how it behaves and what it means to local people. The typeface was developed by local firm Kynoch Press in the 1920s and 30s. "That’s a forgotten font … but it’s been brought back and used in this area, so it’s very local to the space," says Robertshaw.

Robertshaw also points to proposals to include a community space alongside the river, incorporating seating, planting and information about the work. "Without the artists' involvement, that wouldn’t have existed," she says. "[The space is] recessed between the road and the river, so it would be quite a pleasant place to sit and be. From that particular angle you can get quite a good view down the river." 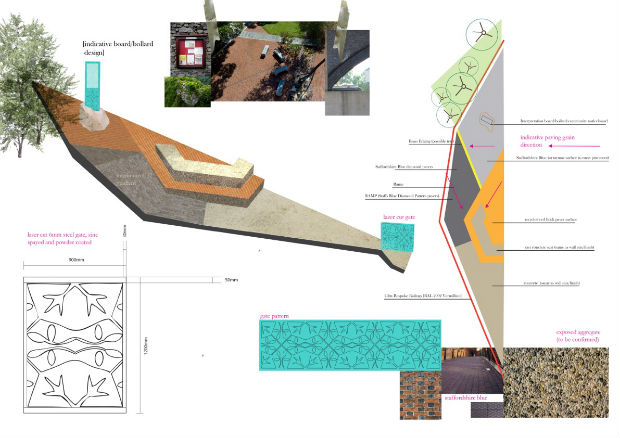 The work to update the design of the flood defence wall was funded by the Arts Council and the Environment Agency, says Robertshaw. MADE has also recently launched a crowdfunding initiative that is asking businesses and local residents to donate money for the artwork to ensure it comes to fruition.

Robertshaw says a key challenge has been embedding the process within the Environment Agency’s design team. "This was a first for the EA, who have never had artists be part of any of their design teams before and so [it was] a new way of working," she says. "There was a significant amount of goodwill on all sides but there was natural concern over how this would work out and so work was needed to increase the buy-in to artist involvement amongst all parties involved."

She adds: "A key lesson is that the earlier the artists are involved the better... I have no doubt that even earlier appointment would have led to an even more collaborative approach amongst the team."