The challenge:
In 2003, Birmingham New Street station, built in the 1960s, was voted one of the worst eyesores in the UK in a poll of Country Life magazine readers. "It was an outdated building, there was no natural light coming into the concourse… and it was quite a constrained, overcrowded station," says Paul Dalton, senior project manager at consultancy and construction company Mace, which delivered the refurbishment project.

The solution:
The aim of the project was to create an inviting building that was fit for the UK’s second city, and would be somewhere that local residents would be proud of, says Dalton. It was also important that the new design could accommodate future growth in passenger numbers, he says.

Following a five-year redevelopment programme costing £750 million, the redesigned station opened to passengers last month. It includes a new atrium, improved entrances and platforms, and a new 450,000 sq ft Grand Central shopping hub, which, according to Network Rail, is expected to attract more than 50 million visitors each year. 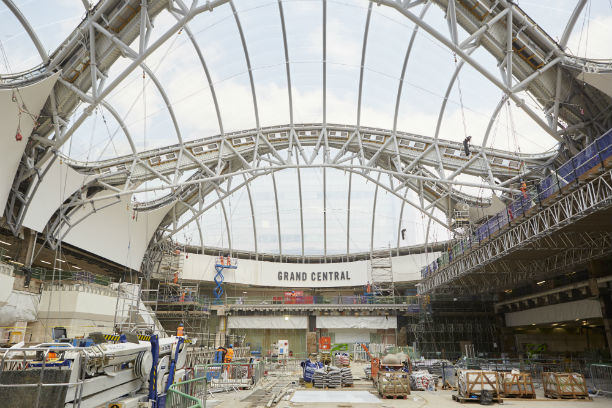 Dalton says that during the construction phase around 170,000 passengers were using the station each day, but the redesigned building can now accommodate more than 200,000 people daily. The increased number of entrances and use of glass was part of efforts to make the building more permeable, he adds. Dalton says the atrium now brings natural daylight onto the concourse as well as acting as a centre piece of the scheme. "It is a grand design," he says.

Throughout the construction phases, the station remained operational. "We learned very quickly that [Birmingham New Street] was an operational station, and probably secondary was a major construction project," he says. 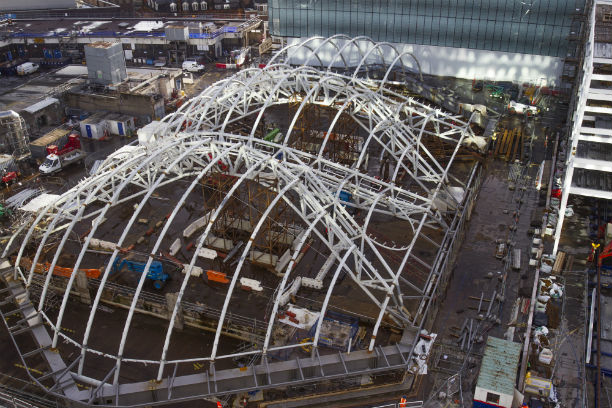 During phase one, passengers continued to use the original station, while the station car park, which originally took up around half of the building, was converted into a new concourse space, with new escalators, a ticket office and retail. In 2013, passengers shifted to the new concourse, while work began on transforming the old station areas. "Without half the building being an old car park, I’m not sure how we would have phased it," Dalton says.

Dalton adds that the former station also acted as a block to economic development, dividing the high-rental property to the north and low-grade accommodation to the south. He says a strategic decision was taken to position the new anchor John Lewis store on the south side of the station to act as a spur for regeneration in that part of the city.

Dalton adds: "You don’t normally see the benefits of that sort of decision for a few years, but even through the duration of the scheme, in only five years, developers have already started to buy up bits of land on the south side of the building, with a view to turning it into higher grade properties, whether it be residential, mixed-use. You can already see regeneration starting to happen."