The Westgate is a tired, outdated, shopping centre conceived in the post-war period, and one of Oxford city centre’s worst carbuncles. It is an inward-facing monstrosity, but is also an important part of the city’s shopping offer. As is often the case with shopping centres of that period, the Westgate turns its back on many surrounding streets, ensuring that the view from Castle Street is one of the worst vistas in Oxford, with abrasive cantilevered concrete beams and columns overhanging the footpath, and the of air conditioning grilles at face level. Old Greyfriars Street is also a particularly gruesome festival of concrete car parking and left over space.

Something desperately needed to be done, and a revamp was long overdue. Earlier this year, work started on site on a scheme that redevelops large parts of it.

Following previous attempts at redevelopment, outline consent was granted and renewed several times between 2003 and 2013. Eventually developer Land Securities and the Crown Estate formed the Westgate Alliance to take it forward. The scheme extends from the heart of the city to the south of the main city centre, and successfully knits together old and new, rebuilding streets and extending the range of shops, cafes and leisure facilities in Oxford. The 800,000sq ft development provides a flagship John Lewis store, which has been keen to have a presence in Oxford for more than 15 years, as well as a boutique cinema.

Four architects were chosen by competition to design the main parts of the Westgate, with planning and urban design consultants BDP co-ordinating the overall strategy. This ‘collegiate’ approach has produced an architecture that is high quality, varied, and works together as a whole. 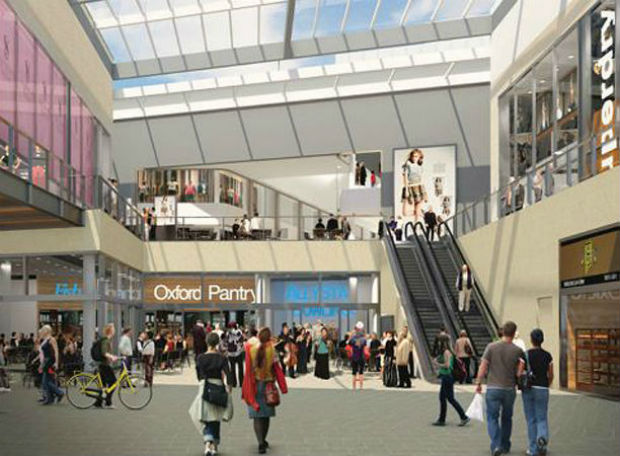 There were debates about the large amounts of car parking proposed, but they are neatly tidied away. It is gratifying also to see improved bus facilities and that cycle parking has been integrated throughout the scheme.

The plans make for good integration into the existing fabric of the city, creating a series of new linked squares (covered and partially covered), and enhancing existing public spaces. The existing areas of open and multi-storey car parks to the south are overhauled with new frontages and better materials.

The proposals improve active frontages, creating new shop entrances from Norfolk Street that will be a significant enhancement. Turn Again Lane will also be significantly improved. The scheme does not extend as far as new shop fronts or activities to Castle Street and Old Greyfriars Street, although they are given a tidying up and vastly improved. This is, of course, a covered shopping centre, and ultimately focuses on internal, rather than external streets. These streets create a permeable network, assuming access is available 24 hours a day.

Andrew Raven is director of urban design in the Oxford office of the property consultants Savills.