Housing associations Peabody and Family Mosaic have agreed to merge, producing an affordable housing giant with 55,000 homes in management across London and the South East. The merger will see Family Mosaic’s chief executive, Brendan Sarsfield, take the helm of the merged group. Also this week, housing associations L&Q and East Thames finalised their merger, and announced a £2.6 billion refinancing package. The new group, which owns and manages 90,000 homes, is aiming to deliver 100,000 new homes under its ten year plan, with half of those homes being affordable.

The owners of a Leeds skyscraper development have agreed to reimburse the city council for the costs of protecting the public from the wind danger it caused. CPPI Bridgewater Place has agreed to pay the council £903,000 to cover outlay on such items as closure of the road junction around the Bridgewater Place building. The wind tunnel effect caused by the tower led to a number of incidents, including one fatality in 2011 when a lorry was overturned by a gust of wind. A system of screens and canopies is to be installed on the building and in the surrounding area to remedy the problem.

The government’s hombuilding fund is injecting £45 million into private rented sector (PRS) homes in the city centres of Leeds, Manchester and Birmingham. Developer Dandara Group is to deliver more than 2,000 PRS homes with support from government housing agency, the Homes and Communities Agency and HSBC bank. The government’s home building fund provides loans for small and medium enterprise builders, custom builders, offsite construction and essential infrastructure. Dandara plans to develop 775 homes in Leeds, 995 homes in Manchester and 323 homes in Birmingham. Planning permissions and contracts are in place, and construction projects are due to start in January.

London mayor Sadiq Khan is recruiting a team of entrepreneurs and business leaders to help safeguard the capital’s workshops, studios and workspaces. The workspace providers board will advise on securing workspace, including through the planning process, and on creating new space, either through identifying sites for new developments or refitting space in existing buildings. The board will also advise the mayor on key issues, such as permitted development rights and affordability.

The capital is also set to see £154 million a year committed to cycling over the next five years, under the Transport for London draft business plan. The new budget will enable completion of phase two of the north-south cycle superhighway from Farringdon to Kings Cross, extension of the east-west superhighway from Lancaster Gate, and work to deliver a superhighway from Swiss Cottage to the West End. There will also be funding for two new highways, running from Tower Bridge to Greenwich and Olympia to Hounslow. Further cycling infrastructure and 20 new quietways are planned.

Leeds City Council has announced plans for three new stations as part of its new transport strategy, to support housing and the economy. A new station is proposed at Thorpe Park to help job creation and housing growth along the east Leeds extension. Stations are also planned for White Rose Shopping Centre and Office Park to aid retail and employment and at Leeds Bradford Airport.

Affordable housing provider Hyde Housing Group and housebuilder Hill have launched a joint venture with a 287 home scheme in north west London (shown below). The JV is to develop the last phase of the Stonebridge Estate regeneration in Brent, which has secured planning consent. Hyde has been driving the regeneration of the estate since 2004, working with resident led subsidiary, Hillside Housing Trust and architect Cullinan Studio. 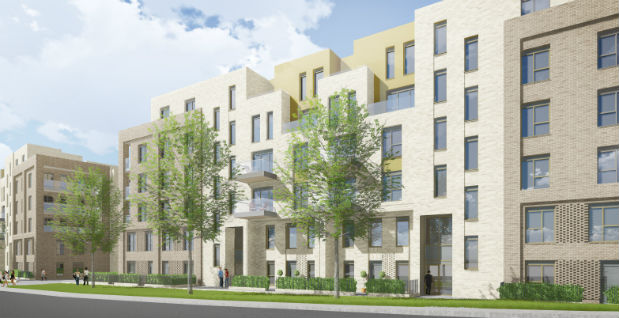 Wakefield Council chief executive Joanne Roney has been named as the successor to Manchester’s Sir Howard Bernstein. Roney’s appointment is expected to be ratified by the council on December 14. Roney has worked for Birmingham, Kirklees and Sheffield councils, and has been at Wakefield for eight years.