The latest new build phase of the Leopold Estate in Tower Hamlets, in east London, forms part of the housing company Poplar HARCA’s wider programme to transform run-down estates in the area into desirable mixed use, mixed tenure neighbourhoods. Earlier estate improvements at Leopold Estate delivered a mix of refurbished and new build homes, a park and a community centre/co-working space.

This second phase, by developer Countryside, involved demolishing the 1960s precast concrete blocks on the site and replacing them with 364 mixed tenure homes. Completed earlier this year, this phase substantially raises the quality bar.

Taller buildings are located centrally near the widest streets, and the façade of the largest has deep vertical cut-backs on the upper three storeys to create a distinctive architectural statement. Full height windows, simple glazed balconies and devices, such as three storey recesses on upper floors and projecting brick elements defining ground floor entrances, all contribute to the successful composition.

The different combinations of bricks, within a limited colour range chosen for each block, help to break down the overall scale and create unity without uniformity. In contrast to these pristine all-brick buildings, the earlier new build phase looks somewhat careworn, despite being only four years old. The main problem is the light-coloured render that has weathered badly.

The most noteworthy aspect of the project is the quality of the streetscape, which can be attributed to a number of factors. An underground refuse system has avoided the clutter of bins that mars many residential streets (shown below). 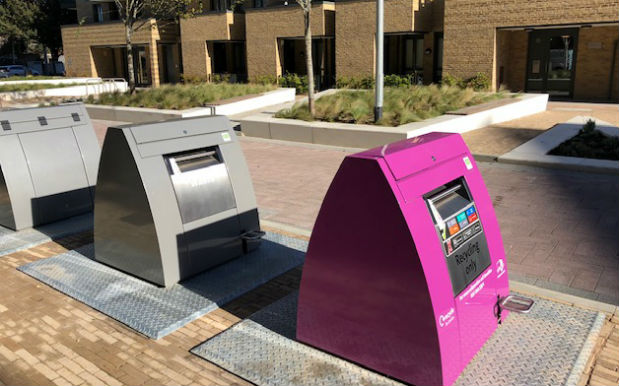 Ground floor homes have front doors or private patios providing defensible space, active frontage and ‘eyes on the street’. New semi-mature trees and retained mature trees soften and add life to the spaces. Street car parking is minimal and includes an electric car club. This leaves plenty of space for planting beds and interesting public art, based on local heritage (shown below). 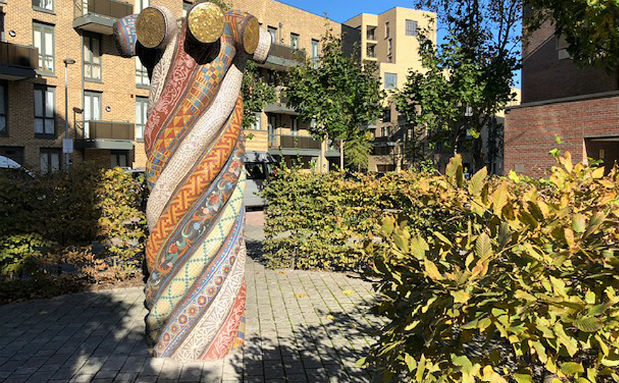 One of the masterplan’s objectives was to create a public route through the estate for residents north of the railway line to reach the shops and school on St Paul’s Way, without walking down the heavily trafficked Bow Common Lane. Unfortunately, although this cut-through is possible it is not obvious as buildings block the view through - so unless you know the route you would be unlikely to venture into what looks like a dead end. However, once you find the route the experience is most enjoyable.

Overall, this project deserves high praise and sets a quality standard that other developers should be encouraged to attain.

Clare San Martin is a partner at architect and masterplanner JTP.