The Cathedral Lanes shopping centre, in Coventry, was designed in the late 1980s to replace ‘temporary’ shops that had been on the site since it had been bombed during the Second World War. One of several UK atrium schemes, it offered retail units around an indoor space covered by a glass roof. Despite a retail frontage to Broadgate Square, which is the traditional heart of Coventry, the scheme was largely inward looking. The idea was that the atrium would link the main shopping precinct area to the west and historic lanes around the Cathedral to the east. This permeability was good in theory, but in practice was little used, because it relied on walking through the Palms restaurant.

Since opening in 1990, Cathedral Lanes was never a successful shopping centre. It failed to achieve a well-focused offer, despite efforts by successive owners at rearrangement.

The external appearance was also criticised. With post-modern towers and gables, bands of orange and yellow brick, and large blank upper floor ‘windows’, it was too obviously a retail design struggling to mediate between late twentieth century and its medieval neighbours.

Twenty years on, as part of its city visioning exercise, Coventry City Council suggested radical changes to the whole of its shopping area, including the possibility of replacing Cathedral Lanes in its entirety.

In the hands of its new owners, property company the Shearer Property Group, a simple transformation has been carried out, which was completed late last year. Most of the existing structure remains but the atrium has been removed, including the high glass roof, which restores views of the city’s spires. The building still has one large retail unit at the rear, but the three principal street frontages are now the focus for a lively mix of restaurants and bars, with outside seating along the west side facing the main elevation to Broadgate Square (shown below, photo courtesy Geoff Wright). 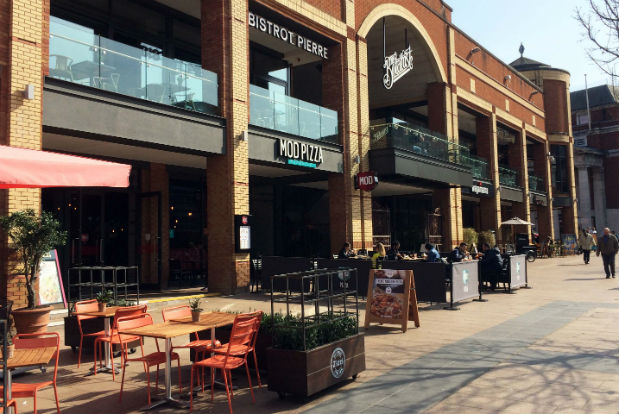 On a cold, sunny monday lunchtime the scheme was clearly popular and well used. The new layout allows full presentation of ground and first floor frontages with galleries at first floor. The architect Rolfe Judd has improved the overall appearance. The tenant mix offers well known national brands and others, pitched at a mid-price market.

Broadgate was fully pedestrianised in 2011. This and other measures by the city council have made Coventry’s streets and squares much more comfortable to walk and sit in.

Contributing to Coventry City of Culture 2021?

Cathedral Lanes is part of the solution now, rather than part of the problem. With its restaurants and bars fronting on to Broadgate Square by the statue of Lady Godiva, it offers a focal point at Coventry’s natural meeting place. It seems so obviously right that perhaps it should have been realised when Cathedral Lanes was first developed.

Much larger regeneration schemes are under way, including the new business district at Friargate and the redevelopment of the South Shopping Precinct. In the meantime, Cathedral Lanes is positive evidence of a new confidence in a city centre already benefitting from the rebuilding of Coventry University, nearby student and city living developments, and other positive environmental and transport changes.