With footfall declining in town and city centres, theatres can act as major attractions to visitors, particularly in the evenings, says Chris Wieszczcki, director at architect TP Bennett. To be sustainable, they need to be centrally located and part of a diverse offer that ensures activity throughout the day and into the evening, he adds.

Jon Morgan, director of the Theatres Trust, the national advisory public body for theatres, says that theatres tend to be distinctive buildings and give an identity to town centres. "This is in contrast to recent trends in high streets, which have become too homogenous," he says. "If they are large enough, they can be self-funding and make a substantial contribution to the local economy, Morgan explains. He points to estimates that the redevelopment of the Bradford Odeon into a live entertainment complex could attract 270,000 visitors to the city and contribute around £10 million to the local economy.

Here are three tips for creating a successful theatre development.

Theatres need to have between 800 and 1,200 seats to attract travelling shows, says Stuart Cade, director at MICA Architects. His scheme for the Brewhouse Theatre, in Taunton, is planned to add 200 seats, which will take its capacity to around 800. "The 1970s theatre building has always been too small to attract major travelling shows," he says. The theatre’s expansion is seen as part of the housing growth in the city. The city’s new population is expected to help support a larger theatre, he says.

A theatre of a significant size can also help lift an area, says Keith Williams, director of Keith Williams Architects. He points to his scheme to rebuild the Marlowe Theatre, in Canterbury, which took the theatre to about 1,200 seats. A 150-seat smaller studio was also created. "The new larger theatre opened in 2011 and has helped to lift the western end of the city centre, creating a cultural hub," he explains (pictured below, PIC courtesy Keith Williams Architects). 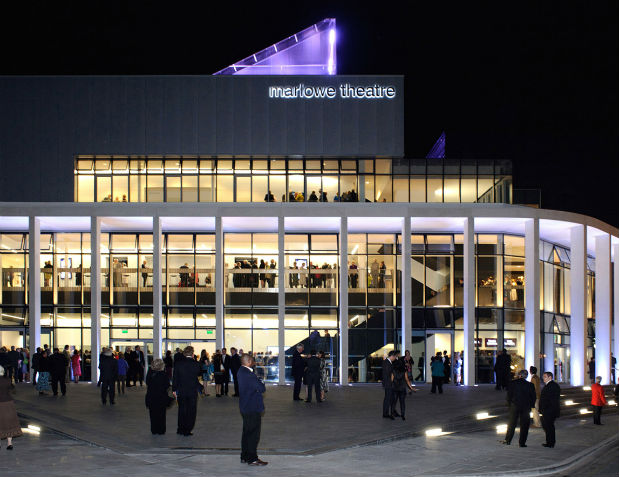 The new theatre is on the same site as the previous one, but it has expanded onto neighbouring sites and new links were made with surrounding streets and the riverside. "This ensures that the restaurants and cafes in the neighbourhood benefit from the theatres," explains Williams.

With the advent of online ticket sales, box office space is being reduced in many theatre complexes, which is allowing larger foyer areas for food and drink sales, says Morgan. But it is important that theatres have a significant frontage and that the foyer and auditorium are not tucked around the back, he warns.

The front of house needs to be a vibrant space with lots of activities, exhibitions and maybe smaller informal performances as well, says Williams.

3. Combine with other uses

Theatres can sit alongside other uses to create vibrant centres through the day and evening, says Morgan. He points to the Bridge complex, in Easterhouse, in Glasgow, which brings together a public library, college, and swimming pool alongside the theatre. "The uses mutually support each other," he explains.

The new 1,200 seat theatre planned at Calverley Square, in Tunbridge Wells, in Kent, is part of a complex that includes a library, museum, new council offices and an adult education centre, says the council’s chief executive William Benson. The scheme, on the site of a council owned car park, includes theatre bars and restaurant, which are planned to open onto an existing park. "The scheme is intended to bring life to the park where we plan to have outdoor performances during the day in the summer," says Benson.

MICA Architects’ Brewhouse scheme, in Taunton, includes studios for dance and children’s ballet and a large foyer for art displays and smaller performances. "These could also spill out onto the nearby riverside," explains Stuart Cade.