Mayfield, an area behind Manchester Piccadilly station, is one of that city’s prime targets for regeneration. The 12 hectare former rail depot site extending from the station to the river Medlock has been largely unused for nearly three decades and the subject of numerous unrealised development proposals.

The Mayfield Partnership, a public private joint venture partnership bringing together LCR, Manchester City Council, Transport for Greater Manchester and developer U+I, are looking to make regeneration happen, with proposals for a major mixed use scheme. This summer, they are seeking planning consent for the first phase of development, which includes more than 8,000 square metres of office space, multi-storey car park, park and public realm. Retail, leisure and some 1,300 homes are among the future plans for the overall scheme, which is designed by Studio Egret West.

Right from its earlies stages, the developers have promoted a vision of a new 2.5 hectare park on the site. This vision has captured the imagination of local residents, but the development partnership also wanted to get the views of children. So U+I asked design studio Standard Practice to work with children on a project to design a prototype structure for the park.

As a large scale project, Mayfield takes time to plan and will take a further decade to deliver. A series of meanwhile projects are, however, happening on the site to help bring it to life and engage the local community, including the GRUB food festival.

Playfield is very different to many meanwhile initiatives, as it is purely for and about children, including those at Medlock Primary School, in Ardwick, the closest school to Mayfield. The link to the school was established during the community consultation into the refreshed strategic regeneration framework last year.

This level of engagement with children is a rarity in development. "We tend to be working with adults, so there has been a learning curve for us," says Standard Practice’s project manager Jess Higham.

The initiative involved eight weeks of workshops, which were attended by around 124 school-age children. More formal classroom based sessions took place at the school, while less formal drop-in sessions were held in a space on the Mayfield site. Over the course of the workshops, the children didn’t simply learn how to design a piece of play equipment; they got the chance to explore arts, crafts, design, masterplanning and placeshaping (see below). 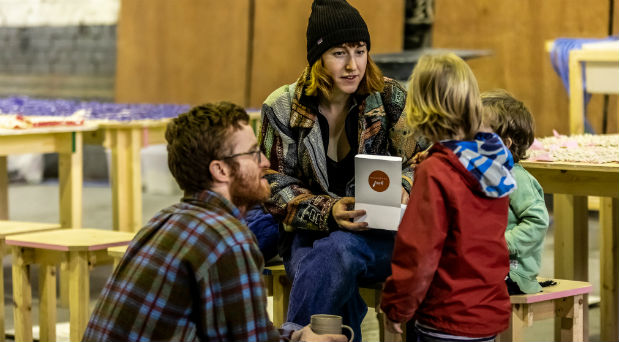 The aim was to encourage the children to explore ideas. "The first workshop was about surrealism, using the exquisite corpse game to create bizarre characters," recalls Higham. "That was a way of getting the children to think about designing for the needs of others, rather than about what they wanted," explains Higham. They used a range of tools to design, including Minecraft, Lego and wooden kits (see below). 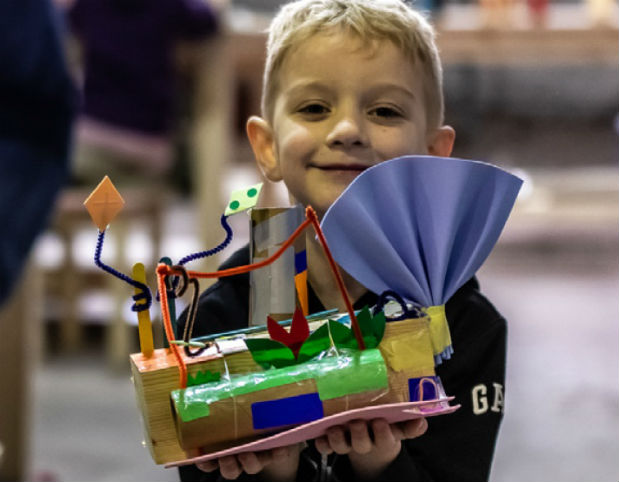 The workshops found that children wanted a structure that would deliver on three themes: safety, imaginative play and a journey. Over the course of five weeks, Tim Denton, a designer and maker of furniture and structures, brought the children’s thinking to life using Duraply plywood. The structure is very different to the usual swings and slides, not least in its colour scheme, which largely spurns primary colours in favour of tasteful grey. "We had a workshop using wooden dowels and asked the children to colour them, but they wanted to keep them natural," says Higham. "So this is relatively neutral compared to most play equipment."

The structure has been installed on a multi-coloured resin base at Mayfield, where it had its official launch last month. It is now open for play on Fridays, Saturdays and Sundays until October.

This structure is described as a prototype and could influence the design of features for the final park. "It’s a symbol of what’s to come," says Higham. The children have had an influence in other ways, coming up with a new name for the final playground: May Play.

Higham says that her practice has learned from the experience of working with the children. "Kids are just as passionate as adults about places," she continues. "But the terminology we use in talking about cities could be much clearer. We had to strip it back for the children. For example, when we tackled masterplanning in week seven, we explained it by relating it to treasure maps."

Children gave broadly similar views to adults when asked about the park, except for one key difference, Higham says. "Adults tend to think about things like transport and access, while children want to know where they can slide or whether they can go in the river."

Experiences such as this help to inform the debate about designing more child-friendly cities and places. Higham points out that extending the design viewpoint away from the able-bodied, middle aged adult can be challenging. "It’s a big change," she says. "For children it involves considering a whole variety of concerns, from how to navigate a street with a pram to whether children can run freely. It is something that we as a practice are taking forward."

For the Manchester children, this is unlikely to be the end of their engagement with the plans for Mayfield. And given the decade-long delivery schedule for Mayfield, today’s junior placeshapers could eventually be the scheme’s actual residents and workers.